For the recent Sports Hall of Fame inductee, the objective is not just winning games, but nurturing the academic and personal success of his players.

Melvin Randall, the legendary Blanche Ely High School boys’ basketball coach, was inducted into the Broward County Sports Hall of Fame late last year. Randall, who just entered his 26th year of coaching high school basketball, holds the record in Florida for winning the most state titles, as well as a long list of other coaching accolades, but those successes are a by-product of a larger vision.

“I’ve been very blessed with what I have accomplished,” said Randall, whose passion for coaching is driven by his desire to help “his kids” succeed beyond high school. “Basketball plays a role, but that’s not the main reason why I’m there for them.”

Randall has led the Blanche Ely Tigers to six state titles in his 17 years as head coach there. The first title was in 2007, followed by four state titles in a five-year span from 2012-2016. The most recent title was garnered last March. Prior to coming to Blanche Ely, Randall led Deerfield Beach High School to its only boys’ basketball state titles in 1997 and 1999. He holds the record in the state of Florida for having the most wins in a single season by finishing 34-1 in 1999.

Randall was named the All-USA Boys Basketball Coach of the Year by USA Today in 2015, after leading the Blanche Ely Tigers to a 28-0 record and the state title. The Tigers were ranked fourth in the country by USA Today that year during regular season and finished eighth overall after playing in the national tournament. They were the highest ranked public school team in the country, and it was the first and only time a Broward County public school has had an undefeated state championship season.

Randall credits his success to studying other local coaches he has looked up to over the years, and incorporating his philosophy of the game with their attitude and philosophy.

“I’ve had my mentors who kind of set the blue print, and I followed them,” he said.

Randall cites John Keister, his basketball coach at South Plantation High School, as one of the biggest influences in his coaching career.

What Randall tries to instill in his players goes beyond basketball.

“I wouldn’t be in this sport if it was just basketball,” he said. “It helps them with their life skills.” 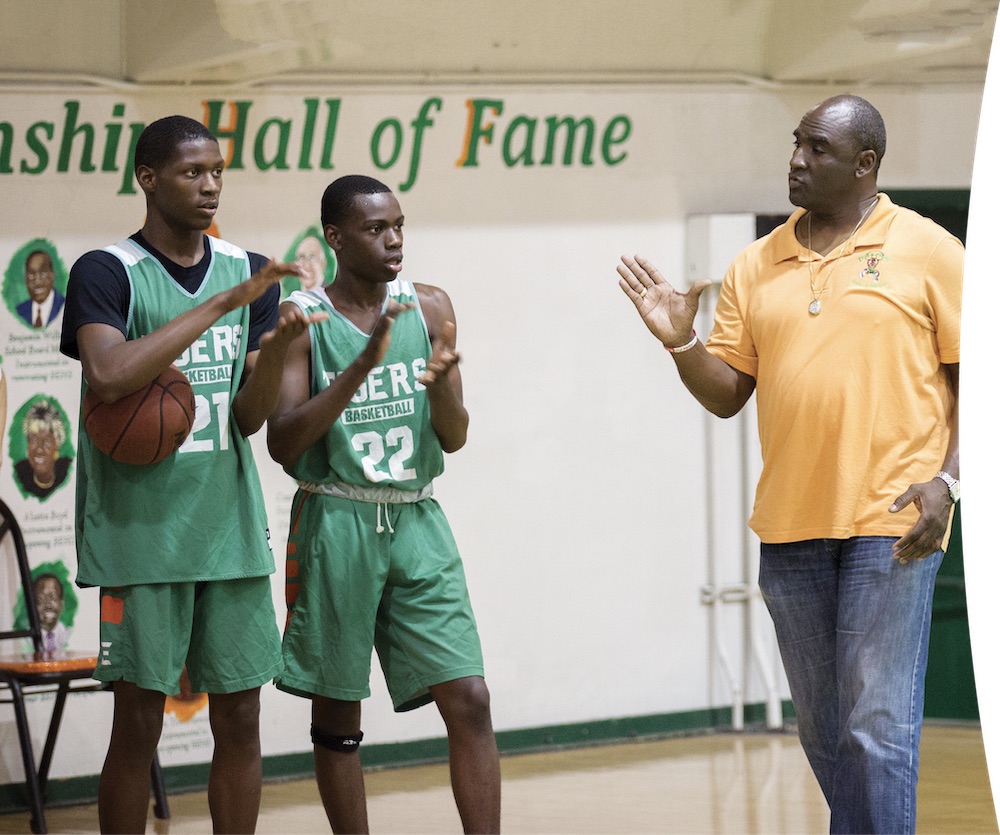 It’s about being able to compete off the court, and making a better life for themselves. They might have a chance at getting a scholarship and “going after a degree to become a doctor, or lawyer, or an engineer, or whatever it may be,” said Randall.

“I always tell them: Don’t let basketball use you; you use basketball,” he said.

He estimates that about 80 percent of his players have gotten full college scholarships, and many have played professionally overseas.

“My proudest accomplishment as a basketball coach is to see my kids using basketball to go on to the next level and to come back with a degree,” he said.

Randall tries to teach his athletes the importance of being able to accept losing a game, “but knowing how to recover from it and make it a learning experience, so they’re better prepared the next time.” He said when he’s in the coaching box, he never allows his players to see him with “a face of defeat.”

“I think I do a pretty good job of keeping a poker face,” said Randall.

Randall is known for a coaching style that emphasizes a strong man-to-man defense.

“Offense brings spectators to the gym to see who’s the great shooter or the great passer; defense is what wins championships,” he said.

Randall said he doesn’t always get the most athletic players, or the tallest players, “but I’m OK with just playing with the cards that I’m dealt with and trying to get the best out of those kids.” If they’re at a disadvantage as far as height, he’ll try to develop their quickness.

“Every athlete has something special about them, and as a coach, you’ve just got to find it,” he said.

His philosophy is about strengthening his players’ minds, “so, I really target their mental toughness, and the physical aspect, that will come.”

Randall said an important aspect of how he coaches is that although he can be hard on his players to bring out the best in them, he never lets them leave the gym thinking he’s frustrated and disappointed in them.

“I would never allow them to take that home and sleep on it,” he said.

Instead, he’ll have a conversation with them, so they can “mend things.”

During season, Randall and his team are in the gym practicing three to four weekdays a week from 3pm to 5:30pm, and sometimes on Saturdays from 9am to 12pm. During the summer, they do weight training and conditioning, as well as Saturday morning beach workouts, from 6am to 9am, that consist of a 1.5 mile-run in the sand, followed by running and jumping drills. After the beach, they head to the gym and practice from about 10am until 12pm.

“My assistant coaches have played a vital role in where I am in my career now,” said Randall.

The team can have up to three games a week. When Randall’s not coaching basketball, he enjoys freshwater bass fishing. If there’s a big game on a Saturday, he likes to go to his favorite fishing spot early in the morning to relax, clear his mind and prepare mentally.

The Tigers have been invited to participate in the Dick’s Sporting Goods High School Nationals three times – a big achievement for a public school – but haven’t won that championship yet. Randall said the last chapter in his book will be winning a national title.

Throughout his coaching career, Randall has also been a math teacher. In addition to teaching algebra at Blanche Ely and Deerfield Beach High Schools, he was a math teacher and the head boys’ basketball coach at Crystal Lake Middle School for eight years. Randall was named Teacher of the Year at Blanche Ely in 2005 and 2013.

Born and raised in Fort Lauderdale, Randall was “a pretty good athlete” at South Plantation High School, where he excelled in basketball, as well as track and field. In 1981, his senior year, he was named Broward County high school Athlete of the Year by the Miami Herald. That same year, he was named Broward County boys high school Basketball Player of the Year by both the Sun Sentinel and the Miami Herald. He was also ranked third in the country in the discus throw.

Randall said he wants to give back to his players what he got out of his experience as a high school athlete.

“I had a coach who was a great leader and nurtured me through the sport of basketball,” he said. “I followed his leadership and ended up getting my college paid for with a four-year basketball scholarship. I graduated with a zero balance.”

Randall was recruited by Cornell University, and took his first airplane ride to visit the campus in New York, but ended up choosing Mercer University in Macon, Georgia, where he earned a degree in secondary education. In his senior year, his basketball team made it to the NCAA (National Collegiate Athletic Association) tournament.

Fabian Lyon, Sr., a sports writer for the Miami Herald, has been covering Randall’s basketball coaching for the past 19 years. Lyon said he was honored to be asked by Randall to introduce him at the Broward County Sports Hall of Fame induction ceremony.

“It was pretty much the highlight of my career to have this coach on the Mount Rushmore of coaches ask me,” said Lyon. “It really said a lot about the mutual respect and admiration that I believe we have for each other.”

Lyon said that Randall is well-respected not only for his coaching record and state titles, but also for how he and his team conduct themselves off the court. He has not compromised his values or standards, which has inspired Lyon.

Randall is a stickler for education and holds it as a high priority, even more than basketball, said Lyon.

Lyon went before the Pompano Beach City Commission in September to request that a mural be created at Blanche Ely High School, or elsewhere in the city, in honor of Randall, who is “not only a great coach, but a great leader.”

The request was brought by City staff to the Public Art Committee, which plans to include the mural in its Fiscal Year 2019 Annual Plan. No location for the mural has been decided on yet, but Blanche Ely High School is being considered.

“The thing that I like about being a coach,” said Randall, “is watching my players grow and mature into productive young men. That’s what is important to me.”