A barge and tugboat that ran aground south of the Deerfield Beach International Fishing Pier a week ago are about to be removed from the beach. The removal operation is scheduled to start on Thursday, Sept. 26, according to a spokesperson for the United States Coast Guard (USCG).

The vessel and barge were being used for the construction of an offshore artificial reef made up of limestone boulders spelling out “DFB.” The project began last Wednesday morning, but came to a halt later in the day when the two pieces of equipment got separated and washed up on shore amid rough waters.

Members of the USCG were on the scene soon after the incident took place to mitigate any threat to the environment.

The USCG’s Sector Miami Incident Management Division called in one of their contractors, National Response Corporation (NRC), which is specialized in providing environmental services related to oil spills.

Using a vacuum truck parked at street level, and a long suction hose, NRC removed all the diesel fuel from the reserves in the barge and tugboat, as well as petroleum-contaminated water from the tugboat’s bilge pump – a total of 1,112 gallons. Approximately 15 to 20 gallons of diesel fuel was discharged into the ocean from the tugboat.

NRC started removing the fuel and water last Thursday at 4pm, and finished the process at 8:30pm the same day.

According to a member of the USCG working on the case, the USCG will pay for the emergency response effort from an oil spill liability trust fund, but will seek reimbursement from the responsible party.

The contractor operating the tugboat and barge, Pac Comm, Inc. (PAC), of Miami, will be responsible for removing the two pieces of equipment from the beach.

PAC submitted a salvage plan to the USCG, which the USCG reviewed and found to be satisfactory.

The Coast Guard will maintain a presence during the removal operation to make sure the process is safe for the environment, and because there is still the possibility of an oil spill from any petroleum-based oil that may be remaining in the tugboat and barge.

Construction of the reef project has been delayed until further notice, according to a spokesperson for the City of Deerfield Beach. 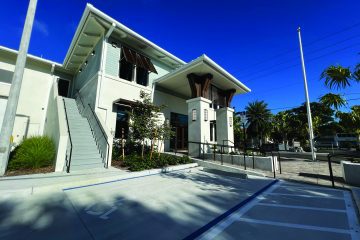