LOCAL NEWS 2020-07-13
LOCAL NEWS / July 13, 2020 / 985
9
Shares
Facebook Twitter Pinterest WhatsApp
Last week, Deerfield Beach unanimously passed a resolution to make Juneteenth an official city holiday.
According to the Miami Herald, the resolution was introduced by District 2 Commissioner Ben Preston, the only Black member of the city commission and the city’s first Black firefighter.
“Juneteenth is not only the day that slavery officially ended in America,” Preston said. “It was on that historic day that Black people in America became, truly became, Americans. Prior to that, they were not,” reported the Herald.
Preston’s request resulted in a lengthy discussion centered around the cost of a paid holiday, which City Manager David Santucci estimated at $110,000.
Preston’s original proposal met some opposition from Mayor Bill Ganz and District 4 Commissioner Todd Drosky over the $110,000 price tag of designating Juneteenth a citywide holiday. The cost would cover both paid time off for city employees and holiday pay for those employees who are unable to suspend operations for holidays, said City Manager David Santucci.
Ganz wanted to find a compromise, insisting he wanted to see a unanimous commission vote on something so important, as reported by the Miami Herald.
Eventually, a compromise emerged and now city employees will all be given the same vacation date: Juneteenth.
About Juneteenth
Dating back to 1865, it was on June 19th that the Union soldiers landed at Galveston, Texas with news that the war had ended and that the enslaved were now free, two and a half years after President Lincoln’s Emancipation Proclamation.
Today, Juneteenth commemorates African American freedom and emphasizes education and achievement. While most states acknowledge Juneteenth, Texas is the only state that gives its employees a paid holiday.  In addition to Deerfield Beach, New York City and Portland, Oregon have recognized Juneteenth as an official paid holiday.
Locally, Juneteenth has been observed in Pompano Beach with the Blues and Sweet Potato Festival held in Apollo Park. 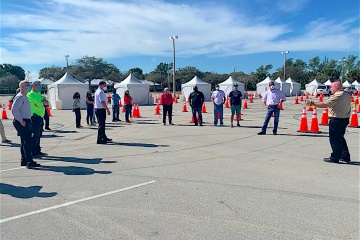