(Washington) Today, U.S. Representatives Ted Deutch (FL-22), Judy Chu (CA-27), Charlie Crist (FL-13), Anna G. Eshoo (CA-18), and Scott Peters (CA-52), introduced the Energy Innovation and Carbon Dividend Act, legislation to put a price on carbon and return 100% of the net revenue as a rebate to American families.
The EICDA will help reduce U.S. carbon pollution by up to 45% by 2030, with a net zero target by 2050. This would be achieved by pricing carbon at $15 per metric ton of CO2e and increasing the price by $10 every year.
On Tuesday, April 6 at 11:00 am ET, the sponsors of the legislation will hold a press conference with leaders from organizations that support the legislation. Click here to register for this virtual press conference.
In addition to the five lead sponsors, the 24 original cosponsors include Reps. Carbajal, Cardenas, Cartwright, Connolly, Correa, Craig (MN), Crow (CO), Evans (PA), Garamendi, Johnson (GA), Kilmer, Lee, Malinowski, Meng, Morelle, Moulton, Phillips (MN), Pingree, Raskin, Roybal-Allard, Scanlon, Schakowsky, Sherman, and Sires.
Rep. Ted Deutch, founding co-chair of the House Bipartisan Climate Solutions Caucus: “The pandemic may have temporarily interrupted the scale of global carbon emissions, but we need a robust plan that makes lasting changes to our energy sector. We’re proposing a market-based solution to put a price on carbon and drive the transition to cleaner energy sources. Returning 100% of the net revenue back to American families will not only cover any increase in energy costs but also give extra support to those continuing to struggle financially from the pandemic. Congress must move forward with this popular and effective plan to curb rising emissions and address a major contributor to climate change.”
Rep. Judy Chu: “The cost of emitting greenhouse gases has always been high, and we have paid that price in more frequent storms, devastating wildfires, soaring temperatures, and rising seas. The Energy Innovation and Carbon Dividend Act would ensure that polluters pay a rising cost for their emissions, driving down greenhouse gas pollution and returning the proceeds to taxpayers every month. This important legislation will be a crucial tool in our country’s urgent fight against the climate crisis.”
Rep. Charlie Crist: “Floridians feel the effects of climate change each and every day. With hotter temperatures, more flooding, increasingly dangerous hurricane seasons, and rising seas, the Sunshine State is Ground Zero for the climate crisis. This crisis demands action now. Carbon dependency is one of the biggest contributors to climate change, so I’m honored to work with my friend and Florida colleague, Representative Deutch, in reintroducing the Energy Innovation and Carbon Dividend Act. It’s past time that we make carbon polluters pay and give that money right back to the American people. A win-win!”
Rep. Anna G. Eshoo: “I’m proud to cosponsor the Energy Innovation and Carbon Dividend Act to address the climate crisis, create jobs and boost our economy. This bipartisan legislation will make the U.S. carbon-free by 2050 and put money directly into the pockets of the American people. This is bold, economy-based climate action that will set America on a path to a greener, cleaner future.”
Rep. Scott Peters: “We can’t save the planet without making every single person an actor in this crusade; placing a price on carbon does that. And the carbon pricing bill we introduced today returns the revenue to American families. It’s poised to reduce emissions, empower markets to transition to a low-carbon economy, and immediately work to slow climate change.”
Former Rep. Francis Rooney, the lead Republican sponsor of the legislation in the 116th Congress: “I am thankful to Congressman Deutch for reintroducing the carbon tax and dividend proposal which we worked on together the last few years. A tax on carbon is the most market- friendly and efficient means of value pricing the adverse impacts of burning carbon and of driving the energy markets towards cleaner fuels, beginning with natural gas and moving increasingly to renewables.”

According to the International Energy Agency, carbon dioxide emissions dropped by an estimated six percent globally in 2020, largely as a result of national policies to control the spread of COVID-19. However global emissions have quickly rebounded; emissions in December 2020 were two percent higher than in December 2019. “In the absence of more rapid policy intervention and behavioural changes, longer-term drivers of growth will continue to push up oil demand,” the IEA stated in its Oil 2021 report.
This legislation would also help the millions of Americans struggling financially from the impacts of the pandemic by returning 100% of the net revenue back to the American people through a monthly dividend check. A Treasury Department report from 2017 analyzes the benefits of a dividend plan, particularly for lower-income Americans.
Carbon fee and dividend policies are supported by leaders in government and the private sector.

The Energy Innovation and Carbon Dividend Act has earned broad outside support:

Mark Reynolds, Executive Director, Citizens’ Climate Lobby: “In an exciting show of support for carbon pricing, the Energy Innovation and Carbon Dividend Act hits the 117th Congress with more original cosponsors than ever. Clearly, more and more members of Congress understand that putting a price on carbon pollution is an effective way to reduce that pollution — a critical step for the U.S. to hit net-zero emissions by 2050 and stop climate change. A carbon price also pairs well with other climate policy priorities, making the transition to a clean energy economy as fast and predictable as possible. Rep. Deutch and his colleagues understand that carbon pricing is a policy that meets this moment, and Citizens’ Climate Lobby applauds them for putting this bill forward.”
Bob Perciasepe, President of the Center for Climate and Energy Solutions (C2ES): “The Energy Innovation and Carbon Dividend Act represents the type of ambitious climate action we need from Congress. This kind of comprehensive market-based approach is an important pillar of long-term efforts to decarbonize the U.S. economy. Our work with leading businesses highlights an economywide carbon price as an effective, efficient way to drive investment in the low carbon transition. Importantly, market-based approaches must also take care to avoid disproportionate impacts on communities vulnerable to the risks of transition and a dividend is one approach that could can help to address these concerns.”
Steve Moyer, Vice President for Government Affairs, Trout Unlimited: “Climate change is no longer a distant problem— it’s right here, right now in the form of rising temperatures, unpredictable floods, worsening droughts, and more intense wildfires. Climate change threatens the resilience of native trout and salmon fisheries, from the Rio Grande cutthroat trout of Colorado and New Mexico to the Eastern brook trout of Appalachia and the Northeast. Trout Unlimited believes it is time for Congress to seriously address the root cause of climate change. Congressman Deutch’s bill, the Energy Innovation and Carbon Dividend Act, would use market mechanisms to substantially reduce carbon emissions—and help us save our fisheries, the health of our communities, and the watersheds on which they rely.”
Dr. Jessica Moerman, Senior Director for Science and Policy, Evangelical Environmental Network: “As evangelical Christians, we are called to be good stewards of God’s creation and ensure all children and families have a healthy environment to grow and thrive in. Climate change and carbon pollution, however, already threaten the health and safety of Americans across the country. We support the Energy Innovation and Carbon Dividend Act and other carbon pricing proposals that simultaneously reduce carbon pollution, advance the clean energy economy, protect low- and middle-income families from cost increases, and keep American businesses competitive on the world stage. We are grateful to Representative Deutch for his continued leadership and look forward to working with him and the bill’s sponsors to make carbon pricing a cost-effective solution to the climate and pollution crises.”

PICTURES: Pompano Beach Fishing Village- Some Delays; Some Speeding Ahead 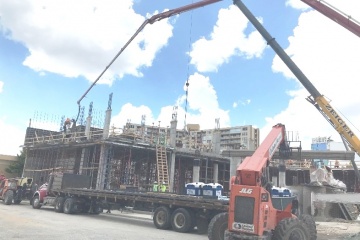