As local artist Steven Mikel opened the front door to his Coral Springs home, the strong aroma of freshly-brewed coffee wafted out and struck my nose like an invigorating smack to the face. The smell was delicious, roasted and buttery-smooth — intoxicating to a coffee-lover like me. Inside, Mikel immediately offered me a hot cup of black coffee with a heaping spoonful of sugar. As I sipped the hot brew, I peered around Mikel’s home. His furnishings fit his coffee motif perfectly. Chocolaty-brown leather couches, natural wood bookshelves and chestnut brown kitchen cabinets all complimented Mikel’s paintings, which hung throughout his living room and kitchen.

His paintings—mostly large abstract canvases in monochromatic shades of java—are painted with Mikel’s own coffee paint. He home-brews it by reducing coffee into highly concentrated shades of paint and washes. He applies the coffee to the canvases in layers, splashing, swirling, tipping, painting and using a myriad of textured materials like tee-shirts and rope to imprint the paintings, which all evoke a sense of enchanted nature — rain drops, palm fronds, sea oats. Mikel focuses on the magical details of scenes that often go overlooked. The paintings feel somewhat reminiscent of Japanese ink prints or abstract sepia-tone photography.

Mikel is one of about 14 artists nationwide whose primary medium is painting with coffee. When he started back in 2008, he was just one of about four. There was Karen Elend from Tulsa, who painted the classics like the Mona Lisa and Last Supper using Espresso; Angel Sarkela-Saur and Andrew Saur, the trade-marked “Coffee Artists” who were featured on the Food Network’s show Unwrapped in 2007; and maybe one or two more. Now, Mikel guesstimates there are about 14.

When Mikel first discovered coffee painting, however, he didn’t know of any. Coffee art was a completely new craft he stumbled upon by accident when his father in-law, Audra Rogers, had come to live with him and his wife; 93-year-old Rogers, who grew up during the Great Depression and was instinctually built to avoid waste, had been tasked with making the family their morning pot of coffee. Unbeknownst to Mikel and his wife, on Monday mornings Rogers would take the leftover coffee from Sunday church service and run it through their drip coffee pot to reheat it.

“After about two or three weeks we began to notice that on Monday mornings the coffee, well, just didn’t taste quite the same,” laughs Mikel. “Now, I don’t consider myself a connoisseur, but I do like my coffee, so I suggested that If I could come up with a way to utilize the leftover coffee, that he would agree to not run it back through the coffee maker.”

Mikel, who had been painting with watercolors for years and had worked in restaurants as an executive chef and professionally-trained saucier, had an epiphany: he could heat, then reduce the coffee to turn it into paint. This discovery changed Mikel’s craft tremendously. Working with coffee not only shifted his palette from watercolor pastels to monochromatic browns, but also steered him away from his strict bond to realism, to abstraction. He found he actually liked painting with coffee even more than with traditional watercolors.

“I liked it far more because of what it was forcing me to do with contrast and how it was changing how I saw things,” he said. “I think it forces you down paths you would normally not have gone down. I was much more interested with the overall contrast of the piece.”

In addition, the form reminded Mikel of photography, which he had gone to school for in his youth.

“The same things that apply to photography I had always liked and was most fascinated with growing up was that contrast and the details in the shadows,” he said.

“It’s a different way of seeing the world,” he said.

Shifting one’s perception is one of the most valuable benefits of art, Mikel says. Art helps people see differently. In his own work, Mikel hopes he can help his viewers notice the magical details of the world they might ordinarily miss.

“Throughout my life, I discovered that I noticed things that other people seemed to miss; discarded bits along the roadside creating textural compositions, intricate patterns woven within old peeling paint and rusty metal objects, or how pine cones and needles gathered in abstract clumps on the ground pushed together by the mountain breezes,” explained Mikel. “I become entranced by the dynamic patterns of waves on sand, the juxtaposition between light and shadow as the sun rises upon the mountain sides…My artistic vision centers around the revelation of these overlooked or unseen experiential moments hidden within everyday life surrounding us.”

“The ability to help people realize that there is so much inherent, created beauty in just the smallest of things you walk by all the time,” he said. “And of course, it’s one of those pet peeves I guess I’ve always had. You get out of the car and you’re just focused on what it is you are doing from point A to point B: ‘I’m in the car. I’m going to Publix. I’m going to get groceries. And so forth.’ What happens is that because we are so focused and so on-the-clock, we miss so much. Not only do we miss the people that need to see us smile, the people that need to see us say hi, but there’s also the little pieces of the landscape that would help us understand what a beautiful world it is…the smell or the rain or the way it looks on the window. So my ability to take those small little compositions is something that has driven me.”

In addition to the transformations coffee had on Mikel’s own art and craft, Mikel also developed a passion for the topic of sustainability. From his early days of re-using church coffee in his paint, to now, Mikel’s understanding of coffee and sustainability has increased. He recently partnered with Thrive coffee in September. Thrive is a co-operative of small coffee farmers primarily in Central America that joined forces to re-think the coffee market and make it more sustainable, profitable for farmers and environmentally-friendly. Thrive has agreed to donate expired coffee to Mikel to create his paint. In turn, Mikel is donating a slice of his sales back to Thrive to bolster their sustainability efforts. Mikel plans to personally visit some of the Thrive coffee farmers in the next year. 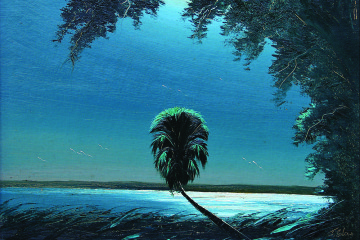