The City Commission unanimously approved in December the $1.8 million purchase of the former Denny’s restaurant located at 2671 N. Federal Highway for the purpose of expanding the Charlotte J. Burrie Civic Center, which is currently being constructed directly south of the property.

Purchase of the property almost doubles the site size for the civic center from 46,688 to 89,073 square feet, and allows for more amenities. A covered patio and a courtyard area with playground equipment are being proposed. Parking capacity will increase from 41 spaces to about 76 parking spaces. A second entrance and exit will also be added.

“When staff learned that this property was available for sale, we saw it as a great opportunity to allow us to enhance the initial design plans for the Charlotte J. Burrie Civic Center,” Assistant City Manager Suzette Sibble told the Commission.

“The addition really adds so much more to the versatility and the use of the center,” said Commissioner Rhonda Eaton, who represents District 2, where the center is located.

Eaton said that Former Vice Mayor Charlotte Burrie worked very hard on getting the project, which is “very much needed,” as the district is one of the only communities in the city without a civic center.

The property had accumulated $640,100 in liens due to code violations related to tree neglect and removal, which the city is planning to waive. The fines were imposed in 2012 and 2013, and had accrued at $100 and $200 a day since then. The actual amount that the City spent to process the liens was only about $2,300, said Sibble.

“This is really going to make a big difference and I think we’re very lucky that it became available for sale when it did,” said current Vice Mayor Barry Moss.

The vacant Denny’s building is expected to be demolished by this March. The estimated completion date of the civic center’s original site is October 2019. The newly acquired site will likely be completed by early 2020, and will cost approximately $700,000 to develop, according to the city’s capital improvement project manager. 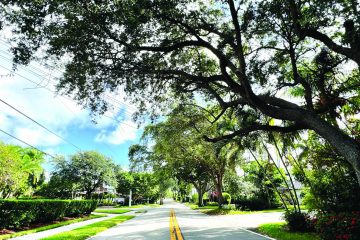