Countless stories have begun with “I woke up with a big idea.”  Bridget Conway awoke with such an idea and now Lighthouse Point has an amazing new house, hundreds of residents and visitors have toured it and 10 new houses are being built in Haiti from the money raised. (The ones in Haiti are smaller, but we’ll get to those later.) Bridget’s vision combined similar designer-show-home concepts she had seen in places like the Hamptons with the current property she was designing on 30th Court. She is an interior designer but bought the property, demolished the house there and worked with two architects to arrive at a floor plan that then became the canvas for her new masterpiece. But that wasn’t enough.  In order to “do something good” she needed to engage the talents of other designers to work on the canvas with her. “I felt this property was a gift to us” referring to the uniqueness of the land and canal views behind it. So, she set about creating the 2014 Designer Show House fundraising event to benefit Food for the Poor and their efforts in Haiti. “Relinquishing control was so difficult” according to Bridget who personally selected the nine other designers for the various rooms in the house. In addition to the designers, contractors, sponsors, and dozens of other vendors were recruited to make the event a success.

The overall design is considered “coastal” as opposed to Key West or British West Indies. It would take another article to describe the differences but the summary might be bright and open with a tropical feel—yet more polished and sophisticated. There are hundreds of details in the house but one example is the exterior trim work done by The Hardy Boys from Pompano Beach.  They work with a material called Azak that essentially looks like painted wood but never rots. All the trim was custom designed for the house. The house tour included four days and evenings of viewings or events and raised $32,000. This is enough to build ten functional houses in Ganthier, Haiti for families there currently living in tents or shacks.

Bridget brought up the subject of using the charity event to sell her big, expensive house but the exhaustion on her face and the passion for the charity quickly assuaged the thought of financial gain from the project. Cathy and Jack Prenner have the listing and seem quite capable of selling this beautiful house as they have done so many times before.  Sitting with Bridget alone in the house after the commotion of the tour allowed me to push for the thoughts behind the creation of the house.  Bridget took me to the outside living room area— part of the 2,500 square feet of outside living space— where she started designing the entire house in her mind. From that spot, my entire field of vision was now modern paradise living with a long view of the canal and the elegant swimming pool, just steps away from the kitchen and family area inside. And since the house is two stories, the scene is replicated above, just steps outside the master bedroom. She had built the entire house around the view from this spot. Bridget said this might be her last major project of this scale. She spoke of working on “bungalows” —if you can call 3,200 square-foot, vaulted ceiling, waterfront homes by that term but her logic was clear.  “There are lots of empty-nestors that want less house and more freedom to travel and such.” 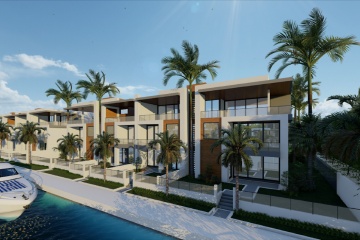