After being closed for a month, the clubhouse of the Lighthouse Point Yacht Club is reopening its doors on Sept. 1 with a fresh look, new head chef, updated amenities, increased operating hours and big plans for the future.

The clubhouse, which hasn’t had a major renovation in almost 30 years, was completely repainted both inside and out. All new furniture has been ordered, and is expected to arrive by the time the season is in full swing.

“The style we’re going for is nautical, beachy contemporary, while keeping the warmth of a club,” said Fort Lauderdale developer Terry Paterson, who in July acquired the yacht club for $16 million, in partnership with entrepreneur Angel Doraliev. The club’s previous owner, James Anderson Sr., owned the club for 44 years.

Other changes include the club’s newly redesigned logo, revamped landscaping and, to add ambiance, a new sound system installed around the entire property, which uses small directional speakers to keep music within the confines of the clubhouse. A revised menu now features healthy, fresh, contemporary, Mediterranean-style cuisine, while still keeping all the members’ old favorites. The food will be served on new tableware in an entirely different presentation style.

Also, as of this month, childcare services have been increased from two nights, to four nights a week.

“We are highly focused on the growing demographic of Lighthouse Point, which we have found to be 40- to 50-year-olds and their families,” said Paterson. “We want to make it easy for our members to come and leave their kids with our qualified staff while they enjoy themselves around the property.”

In the months to come, there are plans to roll out new spa services, such as manicures, pedicures, hair styling and some minor medical spa treatments.

Paterson said a search is actively underway to find a local art gallery that would partner with the club to display and sell art. It would be a way to change the artwork at the club regularly, while providing a unique service to members and their guests.

“If you haven’t visited the club in a while, now is the time to come back,” said Pat Vargas, who has worked there for about 30 years.

But all of these upgrades to the club are just a prelude to even bigger changes that are in the works. If all goes according to plan, the clubhouse will be demolished in March of 2019, and the construction of a new, two-story clubhouse will be completed by March 2020.

The current clubhouse, which was built in 1961, is not up to today’s building codes and hurricane standards, according to Paterson.

“I did an analysis to renovate the building,” he said. “It was going to cost the same per square foot to renovate it as it would to demolish it and build new, and would probably take just as long, if not longer.”

Improvements are being made now so members can enjoy the club in the interim and get a taste of what’s to come, said Paterson.

“Even if we’re spending money on something that will be torn down in the future, we’re perfectly happy to do that to show good will to our members,” he said.

The yacht club’s redevelopment plans, which still need to be approved by Lighthouse Point city officials, also include building 10 three-story townhomes on NE 42nd Street that would sell for $1.3 to $1.6 million, and 10 two-story, single-family waterfront homes that would sell for upwards of $4 million. These residences would be on land currently occupied by the club’s 10 tennis courts, and profits from their sale would be used to fund the new clubhouse.

“Members don’t want us to charge skyrocketed rates for their membership fees,” said Paterson. “They understand that, to avoid that, we need the money from this development, otherwise nobody could afford to fix up the club.”

The first floor of the new clubhouse would feature a 75-foot, three-lane lap pool, kids’ pool, resort pool, separate Jacuzzi, 19 cabanas and a poolside tapas restaurant. The plans also include two bars overlooking the marina (one inside, one outside), and an indoor-outdoor formal restaurant. The second floor would include a state-of-the-art gym with a waterfront view, a health and medical spa, a conference room, a 310-seat banquet hall and a bridal suite for wedding parties. The future clubhouse would also have indoor and outdoor play areas for children.

On the roof of the new clubhouse, there would be three clay tennis courts. Paterson said he would like to have more, but keeping the existing tennis courts on valuable waterfront property isn’t financially feasible. There was no place to put them other than the roof, because space was also needed to meet the club’s parking requirements. However, he is looking at other options to be able to add two more.

The new clubhouse and residences would be done in a “contemporary transitional style with lots of glass and greenery, but with the feel of a yacht club.” The plan calls for using plenty of landscaping to conceal the clubhouse and parking, which would enhance the views of the neighboring residents.

“The building would literally have plantings growing all over it,” said Paterson.

There are plans to put up a six-foot-high privacy wall around the perimeter of the property. A guard gate would be placed at the yacht club’s entrance, which would be moved only about 130 feet from its current location in an effort to maintain the existing traffic pattern of the neighborhood.

Paterson is in the process of requesting city approval for rezoning the property for residential purposes. Once he has that, he expects to start constructing at least the first two houses and one townhome building (there will be three separate buildings for the 10 townhomes) within four months.

Paterson, who is president of Paterson Project Management, began research on the yacht club and possible redevelopment plans two years ago. He has also been reaching out to the club’s current members and to the community to find out what they need and want.

“I’ve been adjusting my ideas to accommodate everybody, and I’m going to continue doing that until we’re all happy,” he said.

Taking care of the current club members is first and foremost, Paterson said. They have expressed a desire for spa services and outdoor pickle ball courts, which he is making sure they will get.

“While accommodating the current members’ needs, the new club is sure to appeal to all age groups and family sizes,” said Paterson.

The yacht club’s $65 million redevelopment plans also include rebuilding the marina sometime after the new clubhouse is finished. In the meantime, minor repairs and electrical upgrades are planned.

The goal is to keep the existing 78 slips, but they will need to be widened to accommodate the new-style vessels that are being built wider than they used to be, said Paterson, a yachting enthusiast.

A floating concrete dock system would be built because it is “the nicest looking” and the easiest for boaters to get in and out of. It will also make the construction process go as fast as possible, since each section can be built off-site, one at a time, with very little down time.

Although the housing development that is planned for the property would take up 840 linear feet of the marina’s usable dock space, Paterson said the buyers of the houses would be given the option to rent out their slips, which would have the same services offered by the marina.

In addition to redeveloping the yacht club, Paterson’s company is currently building a collection of 29 luxury waterfront townhomes in Lauderdale-By-The Sea, as well as 11 homes in other cities across Broward and Palm Beach Counties.

South African-born Paterson presently lives in Coral Ridge, but he and his family will soon become Lighthouse Point residents. A father of three, Paterson is building his own house on the point lot of NE 27th Avenue, overlooking the yacht club. In the meantime, the family will live aboard their 75-foot Azimut yacht, which will be moored at the club’s marina.

“I’m genuinely impressed with the quality of people we have in our yacht club and the community of Lighthouse Point,” said Paterson. “It’s been an honor to meet so many amazing people since I’ve started this project and I’m excited to meet hundreds more over the coming months.” 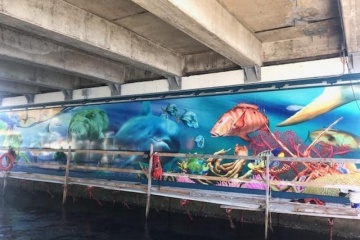