Aren’t you always looking for that out-of-the-way restaurant? You know, the one, way-off-the-beaten-path, where the menu items are fresh and flavorful, but reasonably priced? I found that hidden gem: the Kamm Café (kammcafe.com), located at the far southwestern corner of the Newport Center in Deerfield Beach (1407 West Newport Center Drive). Open from 7am to 2:30pm, Monday through Friday, the Café serves only breakfast and lunch, but also does a busy take-out and catering business.

The Newport Center is at the Southwest corner of I-95 and Southwest 10th Street. It’s a well-maintained, beautifully landscaped office and industrial park. It’s home to the Best Western, Quality Suites and the University of Miami Sylvester Comprehensive Cancer Center. It’s also home to Kamm Consulting, an engineer design firm specializing in consulting and large-scale projects. Art Kamm, the man behind both Kamm consulting and Kamm Café, initially opened the cafe ten years ago as a cafeteria for the 100 employees at his consulting firm. Kamm, however, soon wanted to open up the café to the public as there was a serious shortage of restaurants in the area. Kamm petitioned the City of Deerfield Beach to allow him to open the restaurant in spite of zoning laws that originally prohibited it. He won approval, paving the way for Kamm Café and other restaurants to be located in the Newport Center.

Kamm grew up in Toledo Ohio, but started visiting Deerfield Beach at the age of 5 when he would visit his grandparents’ home in Fort Lauderdale. His grandparents lived on a deep-water canal with ocean access and owned a boat. They took him fishing; from then on, Kamm said he was “hooked for life.”

Prior to fishing in the blue waters of the Atlantic Ocean, he would fish with his father and three other siblings on Lake Erie. Sure, they would catch tons of freshwater perch, but Kamm said there was something special about being 5 years old and catching blue-green Mahi on your grandparents’ boat. Once he found his passion for fishing on the ocean, he created any excuse he could to visit his grandparents in Fort Lauderdale.

In addition to fishing, Kamm developed a strong work ethic as a kid, cutting lawns in the summer and shoveling snow in the winter. His mother had her own business as a cosmetologist and his dad had a company that manufactured testing equipment for air conditioning equipment. His father’s business was Kamm’s introduction to engineering. As a kid, Art was always into building things and even had a keen interest in drag racing vehicles.

As a young adult, Kamm entered the University of Toledo to pursue a bachelor of science degree in mechanical engineering and started a Christmas tree business. His business allowed him to visit Fort Lauderdale during the holidays. He’d pick out 300 trees from a farm in Michigan and have them transported to a vacant lot at Oakland Park Blvd. and Federal Highway. As soon as his last finals and classes were complete before the holidays, he’d drive down to Fort Lauderdale to operate his Christmas tree lot. The business put money in his pocket, allowed him to fish over the holidays and to court the woman who would later become his wife. Fort Lauderdale seemed like a beautiful love affair for the kid from Toledo.

After graduating with his degree in engineering, Art took a job as a sales engineer based out of Miami. The job allowed him to move to Fort Lauderdale in 1984. He rented an apartment one block from the beach in Fort Lauderdale, which gave him and his soon-to-be wife the opportunity to explore life on the ocean. After work the couple would relax on the beach and snorkel. Kamm bought a boat, a Wellcraft Nova, which he painted in “Miami Vice” colors, and started fishing. He married his wife in 1985.

With permanent roots in South Florida, Kamm gathered the necessary certifications from the State of Florida to become a mechanical engineer and building contractor. The certifications allowed him to both design and build buildings. He became a licensed State of Florida Professional Engineer in 1992 and established a partnership in a firm called Engineered Environments. He then established Kamm Consulting in 1993.

Kamm and his wife purchased a home in Deerfield Beach, located on S.E. Eighth St. They had two daughters, expanded their home and bought a few bigger boats. A 45-foot CABO Express allowed him and his family to take frequent trips to Chubb Cay in the Bahamas. The location of his home, between the Boca Raton and Hillsboro Inlets, was a dream-come-true.

Kamm soon discovered, however, that it was easier to fly directly to Chubb with his cousin who owned a charter plane service. Kamm had the idea to become a pilot himself. He logged hours on trips back and forth. His cousin allowed him to fly the plane and he eventually got his commercial instrument rating for his twin-engine Rockwell Commander. His plane is kept at Pompano Air Park, making it available for weekend trips to Chubb Cay for fishing and to travel for work throughout the state. You could say Kamm is always on the move. Both his business and fishing take him to a variety of locations around the nation.

Kamm’s business, Kamm consulting, helps companies build from the inside out. When folks look at buildings, they usually focus in on the architecture. Maybe it’s the elaborate entranceway, stunning facade or the majestic vaulted ceilings, but the eye seems drawn to the beauty of a building’s design. But Kamm is all about function over form, and while design is important, it’s his job to make the building work.

Kamm Consulting is a mechanical, electrical, and plumbing (MEP) engineering firm. Kamm’s company designs buildings to make sure the air conditioning is cool, the lights turn on and the toilets flush. So much for glamour; it’s all about function in Kamm’s world. And he’s left his imprint on Deerfield Beach. Some of the projects Kamm Consulting has completed include:

• The recent renovation of Oceans 234: The former Ranch House turned restaurant just north of the Deerfield Beach International Fishing Pier was renovated with the help of Kamm Consulting. Danielle Rosse, the restaurant’s manager, wanted an updated look to complement the property’s outstanding ocean view. The renovation required moving the restrooms near the entrance, expanding the bar and creating more seating areas.

• The MEP design for the Royal Blues Hotel: Rising out of a vacant lot of prime real estate at Hillsboro Blvd. and Ocean Way, the Royal Blues Hotel and Chanson restaurant features 12 lavish guest rooms and an elegant dining room with a 1,500-gallon saltwater aquarium suspended from the ceiling. The five-story, art boutique hotel caters to the elite traveler. Owner Edward Walson and architect Jorge Garcia wanted a hotel that would command attention. Kamm helped plan the MEP design.

• The transformation of the former Howard Johnson: When the owner of Deerfield Beach’s Howard Johnson Hotel wanted to upgrade and re-flag the property as a Wyndham hotel, there were a very distinct set of requirements. There had been several refurbishments to the “Ho-Jo’s” (as locals referred to it during its 35- year existence), but transforming the building into a Wyndham would require attention to detail. The upgrade required a complete remodel, both inside and outside, including the Patio Bar & Grill and Café Med restaurant. The renovations to the eight-story hotel required multiple building code improvements and new building systems within the structure. Kamm consulted on the project and the end result was the Wyndham Deerfield knows today, which was recently named the best franchised Wyndham Hotel in North America by the Wyndham Hotel Group.

• The remodeling of the City of Deerfield Beach Pier, restaurant, restrooms and baithouse: This renovation sparked controversy for many years. Through the Community Redevelopment Agency, the facilities were torn down and completely rebuilt to include the distinguished LEED certification. The facilities, which include the Deerfield Beach Café, baithouse and restrooms, complement the iconic fishing pier. Kamm Consulting helped implement the project.

The beauty of these facilities is nothing without their functionality. Art Kamm’s life has followed a similar philosophy, valuing function and form. He talks proudly of taking a cafeteria for his employees and turning it into the Kamm Café, and changing the zoning for the entire Newport Center along the way. Whether it’s learning to play the piano, pilot his plane or steer his boat, the drive to be successful is ingrained in Kamm. Yet, Kamm is humble, not boastful. When I asked him to sit down and tell me about himself, he responded “why me?” The kid from Toledo is unassuming, but always ready to give his everything.

Kamm has left his imprint on Deerfield Beach by realizing the importance of living, working and playing in the community. 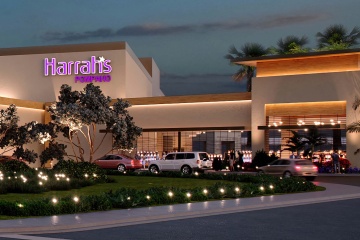