ATLANTIC BOULEVARD/DIXIE HIGHWAY IMPROVEMENT PROJECT: The project to create a new traffic pattern and streetscape improvements on the Atlantic Boulevard/Dixie Highway corridor received overwhelming support from the Pompano Beach City Commission at its meeting on June 28. The Commission voted 6:0 to approve a Guaranteed Maximum Price (GMP) of $45.6 million for the three-year project, which is expected to start this fall.

“It’s an important date in Pompano Beach’s future,” said a city official. “It will set the stage for development in that area of the city for the next two decades.”

The City Commission Chamber was full of people wearing white shirts to show their support for the project. The atmosphere was in contrast to previous meetings where a number of residents, as well as the commissioners, expressed their dissatisfaction with the traffic pattern that was rolled out last October as a pilot program. The proposed traffic pattern caused significant traffic congestion. The critical problem was westbound traffic on Atlantic Boulevard from Cypress Road to Dixie Highway during the afternoon peak period.

Over the months, the City’s consultants – Paul Kissinger of Kissinger Design and traffic engineer Joaquin Vargas – worked to improve the traffic flow by adjusting the traffic pattern and traffic signalization, and collecting data.

“It took time to get it right,” said Pompano Beach Mayor Rex Hardin at the city commission meeting.

“During many commission hearings, we were listening to you and doing some additional fine tunings,” Vargas told the Commission. “We finally got to where we wanted to go.”

The transformation of the Atlantic Boulevard and Dixie Highway corridor (which includes the intersection itself, as well as the north-south and east-west approaches) is the first step of the City’s plan to create a new pedestrian-friendly urban downtown, which will be the future economic engine of Pompano Beach.

The goal of the redesigned Atlantic Boulevard/Dixie Highway corridor is to create a gateway to the city, to improve safety for all modes of transportation, increase connectivity, eliminate blight and to serve as a catalyst for attracting private development to the area. The intersection will include wider sidewalks and medians, newly defined crosswalks and landscape buffers between cars, pedestrians and cyclists.

According to the latest travel-time studies, the new traffic pattern will add approximately two minutes for westbound traffic on Atlantic Boulevard during afternoon rush hour (4pm-6pm), and approximately 30 seconds westbound at the other hours of the day. It creates no increase of time to the eastbound commute.

“I think we’ll have a much safer roadway with minimal delay to the traveling motorist,” said Vargas.

Vargas outlined the main components of the optimized final plans. Presenting a drone video of traffic circulation on Atlantic Boulevard, Vargas noted that currently there are two westbound through-lanes that run from A1A, across Federal Highway, and up to NE 4th Avenue. The configuration of two westbound through-lanes will be continued from just east of Cypress Road all the way to NW 6th Avenue, only eliminating one through-lane on westbound Atlantic Boulevard for eight blocks.

In the final plans, the timing of traffic lights was optimized, and the intersection at Atlantic Boulevard and NE/SW First Avenue was reduced to right turns only, with no north-south movement. The left-turn lanes on westbound Atlantic Boulevard to go south on Cypress Road, and to go south on Dixie Highway, were lengthened to keep cars that are waiting to turn from blocking through-traffic.

Eight lanes were tested during the test phase of the project, which caused the traffic congestion. Almost all of the lanes have been restored in the optimized plan. During the test period, plastic delineator posts were installed to establish the proposed traffic pattern. Vargas emphasized that the previous design with the delineator posts is not coming back, and drivers will not experience any of “the painful periods” like at the height of the test phase when multiple lanes were out of service.

Vargas said the Atlantic Boulevard/Dixie Highway project will reduce speeding and create a safer environment for motorists and pedestrians.

Vargas presented data from the Florida Department of Transportation (FDOT) documenting the number of crashes over the past three years on Atlantic Boulevard from NW 6th Avenue to NE 7th Avenue (122 crashes in 2021). Based on safety levels established by FDOT, this section of Atlantic Boulevard has five times more accidents than the acceptable standard for similar roads across the state of Florida, said Vargas.

Vargas also presented a video that showed a group of children crossing the Atlantic Boulevard/Dixie Highway intersection to get to school with the help of a crossing guard. He said the changes that are planned for the intersection will make it safer for the children to cross. 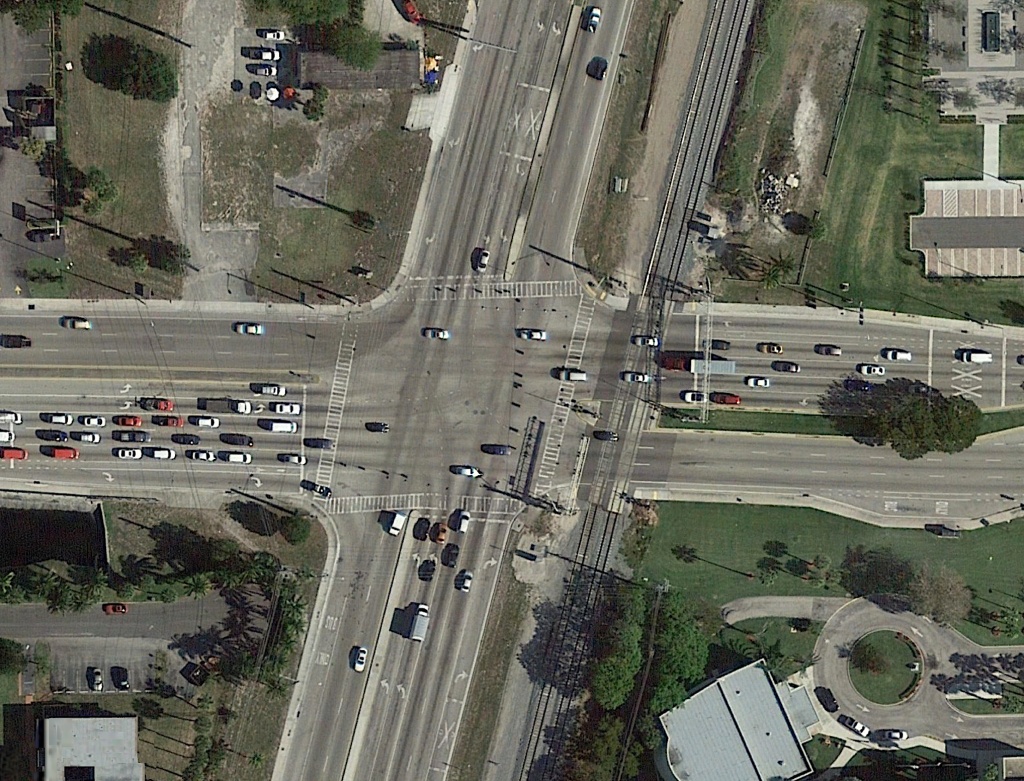 CHANGING THE CHARACTER OF THE CORRIDOR

Paul Kissinger, whose expertise is in planning, landscape architecture and urban design, told the Commission that the urban design component is what will change the character of the Atlantic Boulevard/Dixie Highway corridor and set the stage for the redevelopment of the city’s northwest sector.

“The streetscape project is such an important thing to kind of get this pushed forward,” he said.

Kissinger explained that the plans for the Atlantic Boulevard/Dixie Highway project started many years ago, and take into account the planned growth of the city. He also said that the City and the Pompano Beach Community Redevelopment Agency (CRA) own 60% of the land in the downtown redevelopment area, and “no one is getting kicked out during this redevelopment process.” 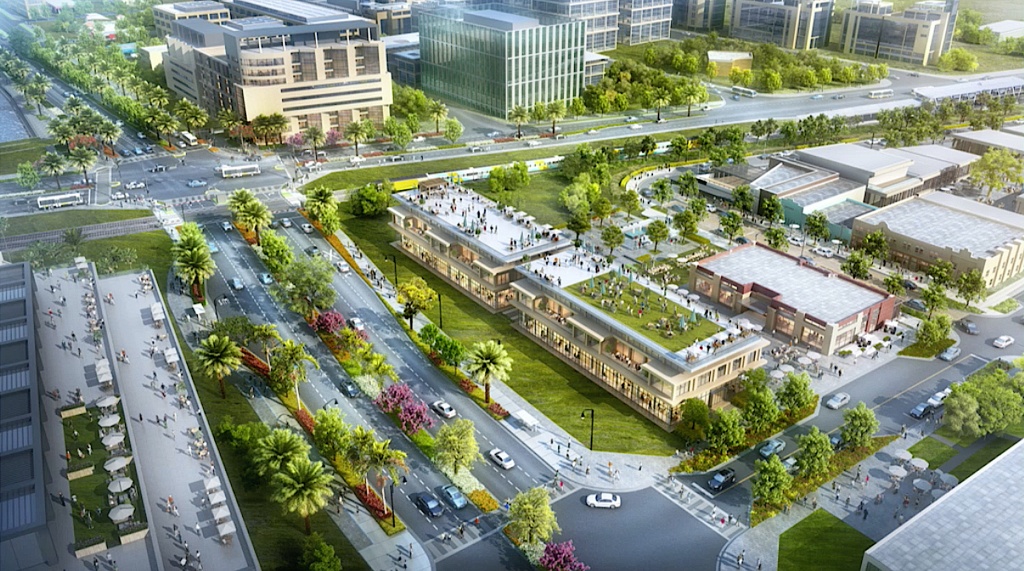 “This roadway improvement project is really the City Commission making a decision to invest once again in our public assets,” said Assistant City Manager Suzette Sibble at the commission meeting. “By doing that, we’re creating a catalyst for redevelopment.”

The project is a joint initiative of the City and the Pompano Beach CRA. The downtown area, which lies at the intersection of Atlantic Boulevard and Dixie Highway, is within the Northwest CRA district. It includes the existing City Hall site, which is planned for redevelopment. The objective is to relocate City Hall west of Dixie Highway in that sector of the new downtown.

The Pompano Beach Cultural Center and Old Town will be part of the new downtown. The area that lies between Atlantic Boulevard and MLK Boulevard, from Dixie Highway to I-95, is envisioned to undergo significant transformation, with new residential units, office space, retail, restaurants and hotel rooms. In this area, completed projects include the Historic Ali Cultural Arts center, City Vista apartments and co-working space, and streetscape improvements on MLK Boulevard; the redevelopment of Annie Adderly Gillis Park is nearing completion.

Old Town already includes the Bailey Contemporary Arts (BaCA) center; Odd Breed Wild Ales, a successful microbrewery; and Fire Fountain Plaza. Projects currently under construction in Old Town include Old Town Square, a multi-family, mixed-use development; South PMP Bar & Kitchen, a contemporary southern restaurant; and The Backyard, a pedestrian and dining plaza. Papamigos, an Asian-Mexican fusion gastro pub, will be under construction soon, and other restaurants, including the Wash House, are being planned for Old Town.

The Atlantic Boulevard/Dixie Highway improvement project is intended to create interactivity and synergy between the four quadrants of the downtown.

“It’s really the experience,” said Sibble. “We want people to be able to traverse between all of these amenities.”

“It’s a vision that we’ve all been working towards for the past decade,” Sibble continued. “There have been studies, meetings, we’ve laid the framework, and we’re finally ready to realize the vision.”

Sibble noted that private sector investment in the new downtown will create jobs for Pompano Beach residents, and will also expand the city’s tax base, which “helps to keep taxes low for all our existing residents going forward.”

The City and CRA issued a bid in early June seeking a master developer for the new downtown. The development proposals are due at the end of August. 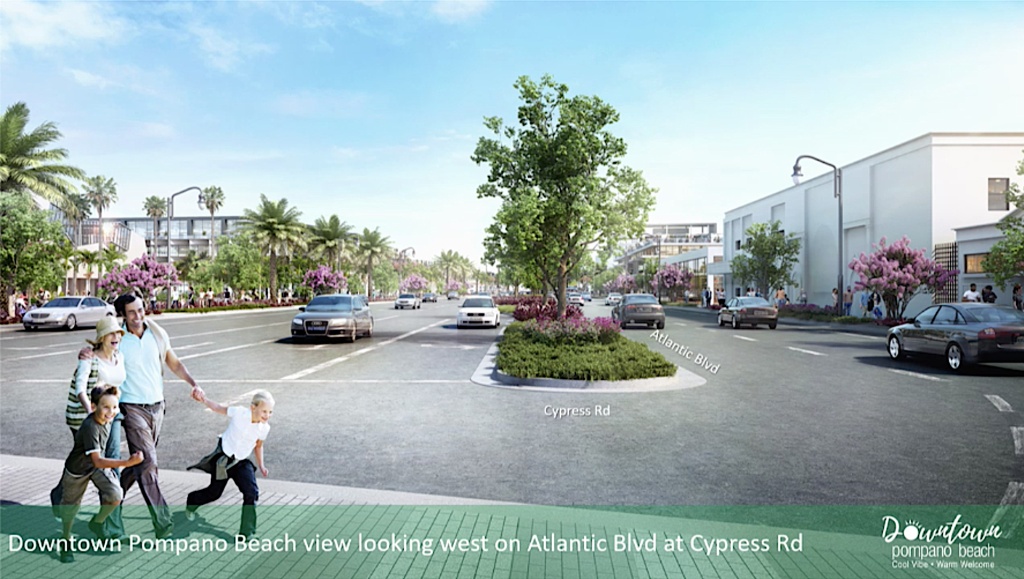 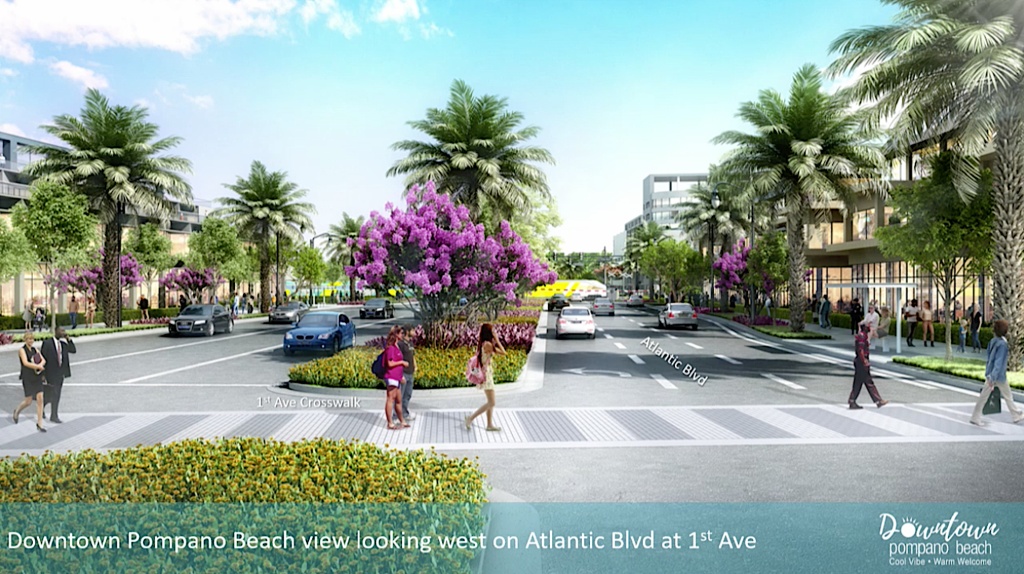 The Atlantic Boulevard/Dixie Highway makeover is part of the Pompano Beach G.O. Bond project to upgrade the Dixie Highway corridor from McNab Road to Sample Road, which was approved by voters in 2018.

Whiting-Turner is the contractor that will be overseeing the construction of the Atlantic Boulevard/Dixie Highway project. The work is expected to begin this fall and to be completed in September 2025, according to Horacio Danovich, the City’s consultant on its G.O. Bond projects.

The project entails construction on Dixie Highway from SW 3rd Street to NE 10th Street, and on Atlantic Boulevard, from a point just west of NW 6th Avenue to a point just east of Cypress Road.

Danovich confirmed that at least eight Pompano Beach businesses will be participating in the project as part of Whiting-Turner’s team.

Florida Power & Light (FPL) will be converting existing light fixtures to the new LED lighting that is being adopted throughout the city; improvements to the railroad tracks at the Atlantic Boulevard/Dixie Highway intersection will be made by the Florida East Coast Railway.

THE POLICE CHIEF WEIGHS IN

Major Wayne Adkins, chief of police for Pompano Beach, spoke during the public input portion of the city commission meeting.

“Whenever you can effectively reduce traffic lanes, but yet provide smooth travel for the public, I’m all for it,” said Adkins, whose background in law enforcement has focused on traffic management, traffic enforcement and traffic homicide investigation.

Adkins noted that following the recent improvements that were made on Dixie Highway from McNab Road to SW 3rd Street, where it has gone from three lanes to two lanes and landscaping has been added, there has been a significant decrease in crashes, and also in the severity of crashes.

“You’ve used the landscaping to visually and aesthetically slow drivers down, but yet the traffic still moves smoothly, so I envision that to be the same case on Atlantic Boulevard,” said Adkins. “I’m definitely encouraged with what I see and I’m looking forward to continuing working with the project.”

During the public input period, Tom DiGiorgio, chairman of the Pompano Beach Economic Development Council, said the initiative for the Atlantic Boulevard/Dixie Highway project has been in the works for over 20 years.

“This is the heart of our downtown,” said DiGiorgio. “If we can get this right, if we can do this properly – and it starts with this intersection – we are on to something amazing.”

THE COMMISSION VOICES ITS SUPPORT

The City Commission was unanimous in its support of the Atlantic Boulevard/Dixie Highway project, and will confirm its approval of the $45.6 million guaranteed maximum price for the construction costs in a second vote at its next meeting.

Commissioner Cyndy Floyd, who was initially not in favor of the project, said: “You heard our complaints, you made the necessary changes, as you told me you would, and for that, my answer has changed tonight.”

Commissioner Tom McMahon said the project team and City staff “did an incredible job of turning this project around, optimizing it to the best possible plan…They knew none of us up here were going to accept the original plan.”

Commissioner Andrea McGee thanked staff, as well as “everyone who came out here tonight, who’ve followed along, seen the changes we’ve made, and also, obviously believe in this amazing project for Pompano.”

Commissioner Rhonda Eaton said she was on board with the project because “I know what this type of civil infrastructure creates for a community.” She said she is looking forward to seeing the transformation of the Atlantic Boulevard/Dixie Highway area.

Vice Mayor Beverly Perkins said: “I’m very pleased with the turn-around on this project because it was not looking good a few months ago. I’m really appreciative of staff and all that you’ve done.”

“They pushed us to do better, and we pushed our team to do better,” said Hardin. “It’s been a group process to get here. And It’s all about doing the best we can for our city.”

Hardin said the project will lead to the development of the city’s northwest sector, and “fantastic benefits” for the residents and business owners there. 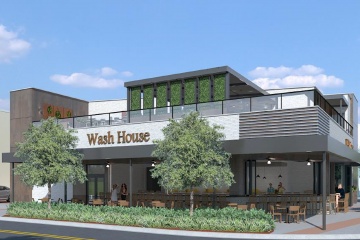