A new Publix is being planned for the anchor space at Shoppers Haven, the shopping center located at the southwest corner of North Federal Highway and Sample Road in Pompano Beach. The 52,000-square-foot space was formerly occupied by a Winn-Dixie grocery store.

The new Publix was mentioned briefly during a recent Pompano Beach city commission meeting by Commissioner Rhonda Eaton of District 2, where Shoppers Haven is located in the Cresthaven neighborhood.

When asked about the project, Christopher Partridge of Partridge Equity Group, which owns and manages Shoppers Haven, said he is under a non-disclosure agreement and hopes to be able to provide more details in May.

Plans submitted to the City show that Partridge Equity Group is proposing to redevelop the grocery store space as a Publix, as well as enhance the facades of the entire shopping center “to create a more modern and inviting appearance.” The owner is also proposing to update the existing parking areas to enhance circulation and accessibility.

A community relations manager for Publix Super Markets was asked if the two existing stores would remain open, and replied that “we do not have any information to share about these stores at this time.”

In addition to a complete renovation, the Shoppers Haven plans include adding a six-story multi-family residential building, called Vista Clara Communities at Pompano Beach, to the south end of the property. The proposed residential building would feature up to 250 luxury rental apartments at market rates, according to Partridge.

An Outback Steakhouse is being built on a Shoppers Haven outparcel along Federal Highway, just south of the Walgreens at Sample Road. Construction got underway this month. The steakhouse is expected to open in August 2021. 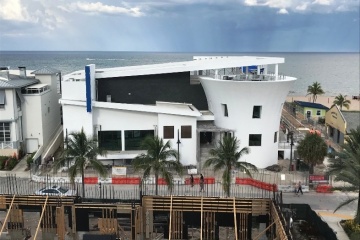