POMPANO BEACH REDEVELOPMENT NEWS: Old Town Square, a $63 million ten-story mixed-use development that is planned for the Old Town district of Pompano Beach, is on track to receive $7.8 million in financing from the Pompano Beach Community Redevelopment Agency (CRA) in order for the project to become a reality.

Old Town Square will be built on approximately 1.90 acres of land located on the east side of NE 1st Avenue, between NE 2nd Street and NE 3rd Street. Geared toward young professionals and millennials, it is slated to have 282 residential units, 5,433 square feet of ground floor commercial space and a 300-car parking garage. Amenities include a resort-style swimming pool and sun deck on the fifth floor, a clubhouse and state of the art fitness facility. The southwest corner of the property will feature a public plaza, colonnade and fountain.

At its July 16 meeting, The CRA Board, which is made up of the mayor and city commissioners, approved an application from the developer, Adam Adache, managing partner of Cavache Properties, for a tax incentive known as a Real Estate Development Accelerator (REDA).

The REDA program was created by the CRA in 2016 to attract private investment dollars to the Northwest CRA district, which includes Old Town. If the development agreement is approved, Adache’s project will be the first to receive financing under the REDA program.

The financing is needed because, although the Old Town district is being developed by the CRA as a restaurant, cultural arts and entertainment destination, it is still considered a transitional, high risk area for capital providers, CRA Director Nguyen Tran explained to the Board.

Old Town Square is the first market rate residential project of its type in the area, so there are no comparable projects to know if the developer will be able to get the rents he has set for the studios and one- and two-bedroom units, which range from $1,375 to $2,300 per month.

“What we’re doing is trying to create that market,” said Tran.

The developer based the cost of the project on an estimated 6.1 percent return on investment, but the capital providers want a 7 percent return on their investment because of the higher risk. The gap between the two return rates, based on a $63 million project, is about $7.8 million.

Depending on the real estate market, the developer “may achieve that gap well before the 20 years, and that’s what we hope and anticipate will happen,” said Tran. There is little risk, since reimbursement to the developer is only made if the project is built and generating tax dollars.

“In the long run, it doesn’t cost the CRA any money,” said Tran. “It’s the developer’s money going back into the project.”

“I think this falls under the category of ‘what’s not to like?,’” said Vice Mayor Barry Moss. “It’s a really clever thought to come up with this form of financing.”

Moss said Old Town Square will be “a beautiful project” and “the spark that gets this neighborhood going all around.”

Commissioner Rhonda Eaton, who represents District 2, where the project will be built, said the project will revitalize and beautify the area, but most importantly, it will establish a comparison level for additional developments within the Northwest CRA district and the near proximity.

“I think it’s the piece that’s going to get us to the top, and keep us going forward,” she said.

“I think this will be a catalyst,” said Commissioner Andrea McGee. “It’s exactly where we’re trying to take the future of Pompano and I’m very excited for this project.”

The developer received site plan approval from the Planning and Zoning over a year ago, and is currently finalizing construction drawings. Under the development agreement, the CRA would assist with an expedited permit process, and the developer would have 24 months to begin construction.

The project is expected to generate 252 jobs during the construction period and 21 permanent jobs.

Adache is a Pompano Beach resident, and Cavache Properties has offices in Pompano Beach and Fort Lauderdale. The attorney representing Adache told the CRA Board that the developer is committed to having as many local participants in the project as possible. 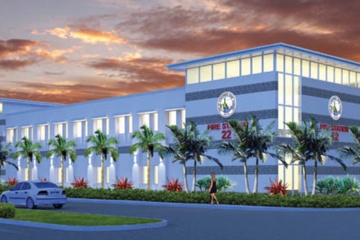