Jane Ellen Glasser recently moved to Lighthouse Point and is in love with our city. She is a poet and artist who grew up in Greenwich Village, N.Y., studied at the Art Students League of New York, Sweet Briar College, and Oscar Kokoschka’s School of Vision in Salzburg, Austria.

“Light Persists” (winner of the Tampa Review Prize for

Poetry), “On the Corner of Yesterday,” and her prizewinning

chapbook, “The Long Life,” which is due to be

released by Poetica Publishing Company in the winter 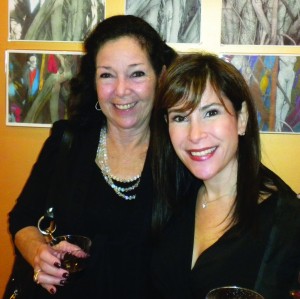 Fairly recently, Glasser has moved into a new art form,

finding fascinating faces and figures in the beautifully

tangled roots of the ficus tree. She refers to creatures that

she finds lying within the tightly woven limbs and roots as

As a member of the Fort Lauderdale Writers’ Group for

two years, her poetry readings have left most listeners

completely awestruck. Not only is Glasser’s poetry in a

class by itself, but when she reads her works, each spoken

passage can be easily compared to the feeling one gets

when listening to the magic of a Chopin waltz.

On this new journey with color pencils, Glasser takes

us visually to places never before seen, just has she’s done

with her pen, and with a special voice that weaves her

As a new resident of Lighthouse Point, we thought it

appropriate to introduce Jane Ellen Glasser to you in this

way. We are proud to have her as a member of our

Q: How did you first become fascinated with the ficus tree?

Glasser: My love affair with banyans, a fig tree of the

genus Ficus, started last March on a visit to Pinecrest

Gardens, “the crown jewel of the village’s park system.”

discuss news and avoid the heat. On my daily walks, I

ubiquitous in south Florida. A beauty that I have often

and 42nd Street, two blocks from my residence.

Q: What inspired you to create the Root People drawings?

Glasser: When I moved to Florida two years ago, one

of my early purchases was the field guide “The Trees of

Florida.” I had left maples, dogwoods, magnolias and

sycamores behind and became fascinated with the rich

variety of palms, and fig trees, especially the strangler fig 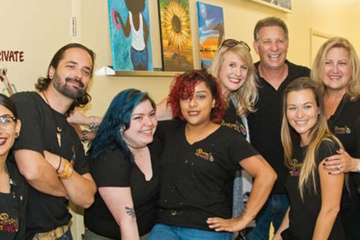