Paul Wiggins, Esq., MBE, a Lighthouse Point resident, was Invested onto an Order of Knighthood at Buckingham Palace for his work on a criminal database for the British overseas territories.

Paul Wiggins Esq., MBE, a Lighthouse Point resident and dual citizen of the U.S. and U.K,, was recently Invested into an Order of the Knighthood by Queen Elizabeth II at Buckingham Palace in London. By being Invested into an Order of the Knighthood, Paul has earned a seat in the “Most Excellent Order of the British Empire.” Such a rank has been given to British citizens from the government since 1917 in recognition of top-notch civilian and military achievements. Wiggins was honored for his creation of a computer system and database that helps the British Overseas Territories in the Caribbean track criminals. The system, most often referred to as the Overseas Territories Regional Criminal Intelligence System (OTRCIS), was also used by U.S. authorities to help identify the Boston bombers.

Paul, his wife Gerzell and some close friends attended the honorary ceremony, officially called an Investiture in the U.K., which was held in the Royal Ballroom in Buckingham Palace on March 10.

“Having an opportunity to visit the palace for this life changing event is an experience I will never forget,” said Paul’s wife, Gerzell Wiggins. “For Paul, having the British Monarchy recognize and bestow this title upon him for the amazing work that he does with the Foreign and Commonwealth Office and their territories is an honor and a privilege.”

Now 91 years old, Queen Elizabeth II does not partake in as many investitures as she once did, instead having Prince Charles, Princess Ann or Prince William conduct the ceremonies. Wiggins was thrilled to learn the Queen herself would be giving him his medal of honor.

“Who better to do it than Her Majesty herself,” said Paul.

Along with Paul, there were approximately 60 honorees at the March 10 investiture. Before entering the ballroom, honorees are briefed and given detailed instructions on how to properly walk, bow or curtsy, shake the Queen’s hand and address her. In the first introduction, honorees address the Queen as “Your Majesty.” In subsequent meetings and during this conversation, they are instructed to address her as “Ma’am.” After the briefing, honorees are guided to the Royal Ballroom, where they are called to the podium one-by-one. The Queen graces each of the Knights’ shoulders with an actual sword (in the case of the Queen, one that belonged to her father, George VI). Then the Queen places the insignia and medal on
each recipient.

Paul said the investitures are one of the few occasions when the Queen actually removes her gloves. In British culture, this is an extreme symbol of respect and honor. Paul said he was humbled and honored to both shake Her Majesty’s hand, and converse with her. After each honoree is adorned at the podium, they have the opportunity to speak with the Queen for two minutes. Wiggins said the conversation is traditionally not to be discussed with anyone, so he couldn’t reveal what was said.

One of the most striking observations Paul made was how differently he and his wife were treated once he was made an official Member of the British Order (MBE). As an MBE, Paul and his wife are now able to use the Chapel of the Most Excellent Order of the British Empire, located at the East end of the Crypt of St. Paul’s Cathedral and were able to skip the visitor line at the chapel, go down into the East end of the Crypt, pray quietly and take photographs.

“The British guards’ chivalry completely changed,” Paul said. “They were like, ‘Yes, right this way Sir.’ It was remarkable. The whole cathedral is quite amazing.”

As an MBE, Paul and his wife are now invited to attend services and functions at St. Paul’s Cathedral, may renew their wedding vows there, and may have their children baptized at the Cathedral. Paul said he and his wife hope to go back to London at some point to attend.

Paul’s induction into the British Order was in recognition of his work with the British Overseas Territories in the Caribbean. Paul is officially employed by the British Consulate-General out of Miami, but frequently travels to work in Anguilla, the British Virgin Islands, the Cayman Islands, Montserrat, Turks and Caicos Islands, and a few other extremely remote locations in the South Atlantic. At these locations, Paul helps implement and train local leadership and officers on how to use his crime intelligence system, which he has been developing since 1996.

The system has different names in different locations and can be customized to suit the user’s needs, but is generally referred to as the Overseas Territories Regional Criminal Intelligence System (OTRCIS). OTRCIS allows for powerful data storage, search, retrieval and analysis of data to assist in the development and dissemination of intelligence to help solve and combat crime. Paul started the database from scratch in 1996 and has helped build it to the mature and robust database that it is today.

Because of the remoteness of many of the overseas British Territories, in some cases OTRCIS was the very first computer system the islands had ever implemented. Paul said some of his training had to start as basic as how to use a computer mouse and keyboard. Now the trainings are robust.

Anguilla’s Governor, Christina Scott, was excited to have Paul’s system in place on Anguilla.

“I am delighted to see the how this system and the training will improve the efficiency and effectiveness of the challenging work of solving crimes, which in turn will help keep Anguilla a safe place to live, work and visit,” she said on social media in response to a review of systems on the island.

Even though Paul is now one notch higher on the British Order, he remains humble.

“I’m still Paul,” he said, “the same Paul that walks down the street with his dog, Riley.” 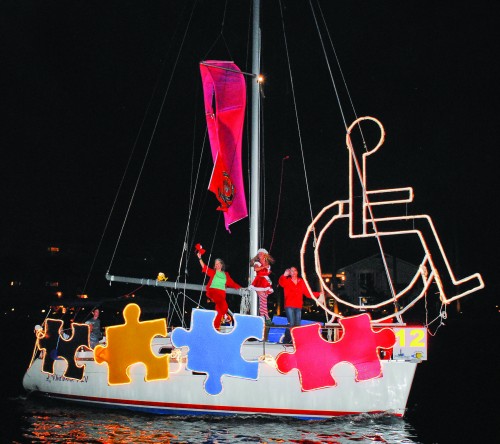