Pompano Beach has joined forces with Broward County Crime Stoppers to combat a proliferation of chronic illegal dumping throughout the city, and members of the community are being called on to help in the effort.

The city’s Public Works Department has placed signs provided by Crime Stoppers in areas of the city where high levels of illegal dumping are occurring. On the sign is a phone number that citizens can call to anonymously report dumping violations. If the information leads to an arrest, the caller could receive a cash reward of up to $3,000, depending on the quality of the tip.

In addition to the signs, surveillance cameras will be used throughout the city to help resolve the dumping problem.

Information anonymously provided to Crime Stoppers is turned over to the Broward County Sheriff’s Office (BSO) and to the city’s Code Compliance Department. It can result in a criminal case or a case that’s brought before the city’s Special Magistrate for a hearing. The city can also use other legal remedies, such as an injunction.

In extreme cases, if a property owner doesn’t clean up the trash that was dumped on their property, whether by them or someone else, the Special Magistrate can issue an order imposing a daily fine, which can serve as a lien against the land and any other real or personal property. If the fine isn’t paid within 90 days, the city can foreclose on the lien or sue to recover the amount of the lien, plus interest.

BSO has created a new position for a deputy who will be assigned strictly to nuisance abatement and illegal dumping cases in Pompano Beach, working the criminal cases through the court system and the State Attorney’s Office.

According to Florida statute, there are instances in which dumping constitutes a felony, such as dumping trash that exceeds 500 pounds in weight or 100 cubic feet in volume, or any amount of material that comes from a commercial property or is placed by a commercial entity. Dumping hazardous waste is also a felony.

BSO has the authority to seize a vehicle that was used to commit a dumping felony if the owner of the vehicle is arrested for the offense. The vehicle is considered contraband that is subject to forfeiture, and becomes the property of BSO.

When the amount of trash dumped constitutes a misdemeanor, BSO has to witness the misdemeanor in progress before they can take action.

Tips can be called in to Crime Stoppers 24/7, or submitted anonymously online or by using a phone app (see browardcrimestoppers.org). All rewards are paid by Crime Stoppers, which is a non-profit organization that raises money through fundraising. The Crime Stoppers program, which has been operating in Broward County since 1981, serves as a clearinghouse for tips not only pertaining to illegal dumping, but all types of criminal activity.

This is the first time Pompano has teamed up with Crime Stoppers for illegal dumping. In the past, the city used a more generic “No Dumping” sign.

When the subject of illegal dumping came up at a recent city commission meeting, it was noted that although some violators are from outside the city, many are residents of Pompano Beach.

Residents were encouraged to take a photo, when possible, of the person and vehicle tag while the illegal dumping is in progress, and to follow up with a phone call to Crime Stoppers.

Mayor Lamar Fisher said: “Let’s get out there and let’s become one force to police our own.” 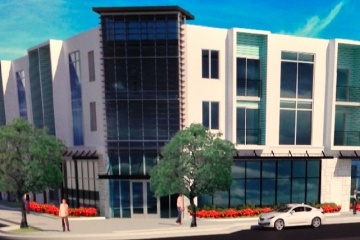